Sgt. William Jasper Monument | Monuments You May Have Missed

Almost exactly forty years after the death of Tomochichi, an immigrant from Europe gave his life fighting to recapture our city from the British in the Siege of Savannah. Johann Wilhelm Gasper died on October 9, 1779 in the failed attack. How he became Sergeant William Jasper, and the story of his heroism leading up to his death, is an important part of American history.

At the age of 16, Johann Wilhelm Gasper made the journey from Europe to the New World on the ship Minerva, in 1767.

the ship landed in Philadelphia, where after being given a bowl of soup, he and the other immigrants were given an oath of allegiance. Unfortunately, at the time he was unable to read or write, so when his turn came, he was unable to sign his name: he simply put an “X”. The new colonist next to him wrote “John William Jasper” next to the mark, and so he would live out the rest of his new life in America with the name.

After several harsh years of indentured servitude, Jasper moved south to find land and make a life of his own. He joined the military to earn money, knowing that he would likely have to go to war, as the rebellion had already begun. 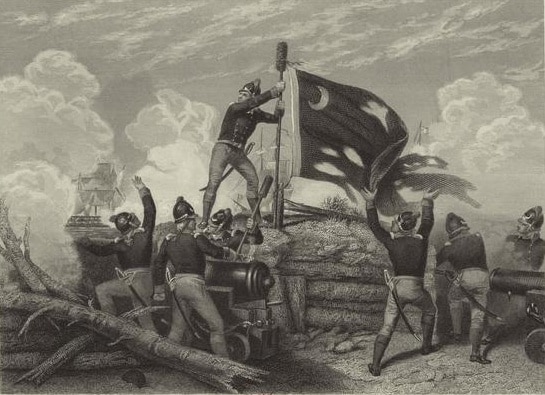 Soon the 2nd Carolina Regiment was sent to defend the Charles Towne Harbor, at Sullivan’s Island from the British Navy in 1776. Jasper and the troops there served under Colonel William Moultrie, who ordered construction of a new fort called “Fort Sullivan” to protect the area. The fort was incomplete when the British arrived just a few days later: the back of the fort was wide open!

The Moultrie Flag was raised over the unimpressive, incomplete little fort, and the might of the British Fleet bore down on it, beginning a ten hour siege.

The 2nd Regiment had little ammo, and could only fire when the invading ships were very, very close. At some point, the Moultrie Flag was shot down by the British, and it flew backwards out of the fort into a ditch. William Jasper leaped off a wall, ran to the ditch, recovered the flag under fire, and sprinted back to the fort, flag in hand.

He tied the flag to a cannon sponge, the device rammed into cannons after they fire to clean out any left over gunpowder. With the makeshift flagstaff, he climbed to the parapet, and held the flag in place there by himself.

Inspired by his heroism, and emboldened at the site of their flag, the troops rallied, and fought off every British ship for the remainder of the grueling siege. The British retreated, Charles Towne did not fall, and Fort Sullivan was renamed Fort Moultrie.

The story of the young immigrant soldier’s heroism, and the image of the Moultrie Flag flying to defy the British at the battle spread throughout South Carolina and Georgia.

The Moultrie Flag became the official flag of the South Carolina militia, and Sgt. Jasper was called to see the Governor.

Governor Rutledge gave Sgt. Jasper his personal sword, and promotion to the rank of Lieutenant: an officer’s commission, a position of prestige and opportunity. Jasper refused the promotion, claiming that he would be an embarrassment as an officer, since he was illiterate.

The Governor instead offered him a “roving commission” to select a small group of soldiers, and roam the countryside, spying and attacking unsuspecting enemy outposts: something akin to his own special forces unit.

In October of 1779, at the Second Battle of Savannah, William Jasper was shot while fastening the battle flag of his Revolutionary War regiment to its perch. It is said that he never relaxed his grip, and that he escaped with the flag to a place of safety, ensuring that it was not captured, before he could die.

The Siege of Savannah ultimately failed. The British would hold our city for 3 more years. We lost Sgt. William Jasper on the 9th of October, and General Casimir Pulaski two days later. 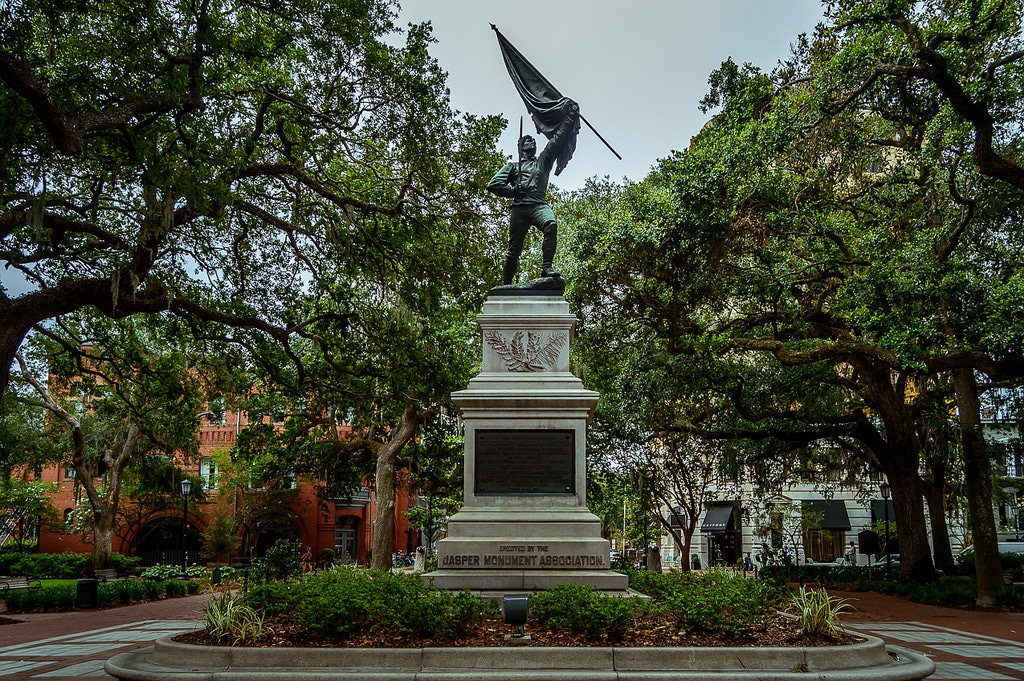 But the heroism of the man lived on as legend. In 1888 – over a hundred years later – a monument honoring him was erected in Savannah’s Madison Square on Bull Street.

Standing over 15 feet tall, the monument features a bronze statue of Sgt. Jasper. The figure portrays him in uniform, grasping his sword in one hand, and a wound to his body in the other. At his feet you’ll find his hat penetrated by bullets.

The man who arrived in America as a boy, and died in Savannah as a hero, is remembered every year at the Sergeant William Jasper Memorial Ceremony, and by the towns and counties that bear his name. 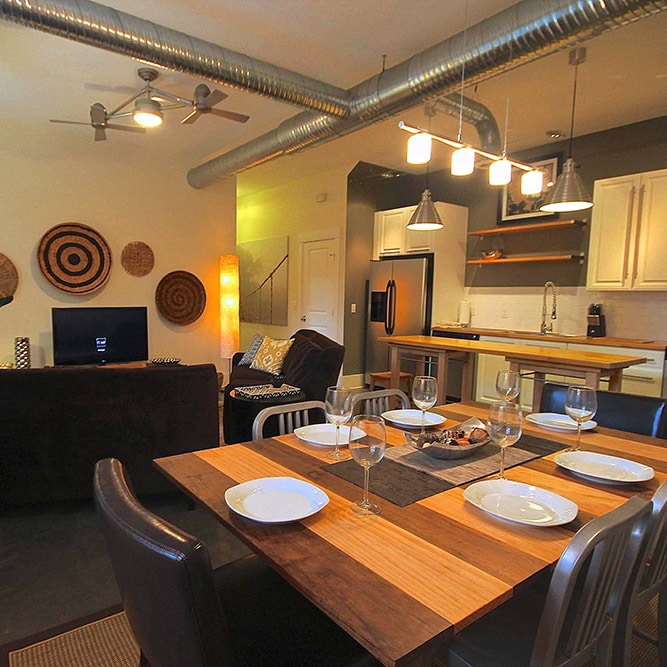 3 BATH
Garden level Urban Chic offers guests a private paradise unlike anything else in Savannah. Located 2 blocks from Famous Forsyth Park in the historic downtown, it is perfect for your getaway.

1.5 BATH
Set against the iconic backdrop of Savannah’s maritime past, the Pirate’s Quarters at Trustees Village offers luxury accommodations on one of the most historic blocks in the Landmark Historic District.